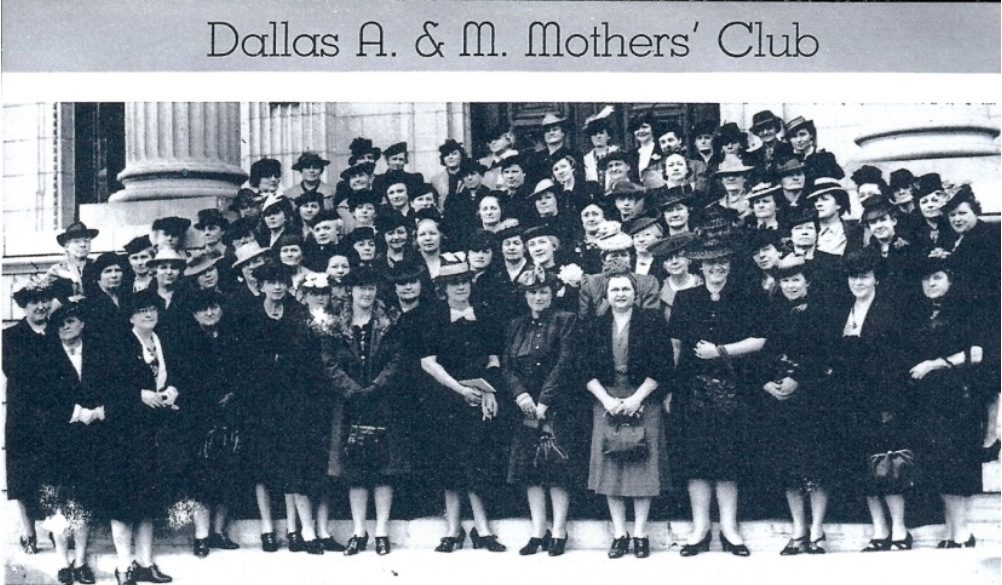 The Dallas County Texas A&M University Mothers’ Club (Dallas County Aggie Moms) was established in 1922 as the first A&M Mothers’ Club.  Read more about our founder, Mrs. H.L. Peoples, and the history of our club below.

The following article was extracted from a paper written by Mrs. E. Allen Brown, a close friend of Mrs. Peoples, on the occasion of the 50th anniversary of the Dallas A&M Mothers’ Club in 1972.

I met Mrs. Peoples first in D.A.R. work in the late 1940s when she was on a committee of which I was chairman. We seemed to have a special affinity for each other, both of us with an intense interest in history and genealogy. Later when our sons entered A&M College in 1951, I joined the Dallas A&M Mothers’ Club and many times I took Mrs. Peoples to the meetings.

One of my first jobs, as a freshman mother, was press chairman, and I set about getting the  details of the history of the club directly from Mrs. Peoples, feeling that, with her keen  intellect and wonderful memory, she was a storehouse of facts that should be preserved. We spent several sessions together, with her answering many questions and giving me the  facts as she remembered them. Many of these facts came out in The Dallas Morning News article on February 5, 1952 and in The Dallas Times-Herald of January 31, 1956.

It seems that in September, 1921, Mrs. Peoples was attending a meeting of the Congress of PTAs in San Antonio, when a discussion came up of juvenile delinquency and hazing in  colleges. Mrs. Peoples’ oldest son, L. L. Peoples, Jr., was a freshman at A&M College at the time so she decided to make the train trip home via College Station. When she arrived there, her son was away on a Corps trip, but she talked with several students about conditions at A&M. One was a senior student, John Mayo of Dallas, and he said that he felt parents should not wait until graduation time to visit their sons, but should visit them during their freshman year because they needed a touch of home at this time. Roads were terrible then, as my husband, who graduated from A&M in 1924, says. He says that his parents would put him and his trunk on the train in Fort Worth in September, and he wouldn’t be home until Christmas, then back to school after New Year’s Day and home in May.

Mrs. Peoples came home from her trip, and in her usual way, wrote to her son and asked him how he would feel about her organizing a group of Dallas mothers with sons at A&M, and he was all for it. In late November, he wrote to her and reminded her of this, and wanted to know why nothing had yet been done. Well, it was February, 1922, before the  group of ten mothers, including Mrs. Peoples, got together. By that time she had contacted Tyree Bell, President of the Dallas A&M Club, and had been assured of that club’s cooperation. So the Dallas A&M College Mothers’ Club was organized in February, 1922, at the home of Mrs. R. W. Mayor, mother of the senior student with whom Mrs. Peoples had talked at the College in September. Mrs. Peoples was elected the first president.

One of the Club’s first projects that Spring was preparing and sending a spread by Parcel Post, on the train, to the Dallas boys for a “Picnic on the Grounds.” The boys were expecting it and had everything ready. Now, as they were enjoying the sandwiches, fried chicken, cakes, pie, etc., a Methodist minister, Dr. Stout, President of Texas Wesleyan College in Fort Worth, who was visiting A&M with his son, came by and asked what was going on. When he heard about the Dallas Mothers’ Club, he felt that it was such a good idea, he went back to Fort Worth, gathered together a group of mothers with sons at Texas A&M and organized the Fort Worth A&M College Mothers’ Club. My husband was a sophomore at A&M that year, and his mother was a charter member of the Fort Worth Club.  So — that is why the Fort Worth Club was organized by a man — and so soon after the Dallas Club was organized. As for the “Picnic on the Grounds,” the boys wrote Mrs. Peoples a note of thanks, signing it “Fully Yours.”

The idea of Mothers’ Clubs spread, and there were 51 clubs with 2,256 members by the end of 1971, all starting with a mother with a great vision and a big enough heart to undertake to help all the boys at Texas A&M.

Mrs. Peoples, in her delightful way, loved to tell about the first time parents were invited to the campus. In 1925, she visited Dr. W. B. Bizzell, president of Texas A&M College, and talked to him of her idea of inviting parents to the campus for a visit. He thought this was a good idea. The first time, the College sent out invitations to mothers of senior students to be guests of the college on Saturday, Sunday, and Monday, the week before Mother’s Day. “That was the last time they did that,” she laughed. “They expected 250 and 600 came. They emptied dorms and fed the boys in paper sacks.” This was the beginning, though, of  “Parents’ Day,” that delightful weekend before Mothers’ Day, which has become such a wonderful Aggie tradition. This tradition quickly brought about recognition of the need for better accommodations for visitors, and so the idea for the MSC was born — one need after another was met and acted upon through the years by these courageous women who have contributed so much in a thousand ways to making life better for the students at Texas A&M College.  At the request of the college, they even raised $15,000 for a pipe organ for Guion Hall. Mrs. Peoples felt that this accomplishment brought great recognition for the Mothers’ Clubs, although it took much work.

We all know that one of the stated goals of Texas A&M University for many years has been to develop the “whole man, mentally, physically, morally, and spiritually,” and it is my deep conviction that such activities as Parents’ Day, demonstrating the interest of parents in the welfare of students, has had great influence in the adoption of such  a policy. All because one wonderful, blue-eyed mother with a great love in her heart for young people, and a desire and ability to do something about it, saw a real need and DID something about it.  For more that 40 years, Mrs. Peoples attended the meetings of  the Dallas A&M Mothers’ Club regularly and most of the Founders’ Day meetings in her honor in February of each year. If she ever had a doubt or gloomy thought, no one ever knew it, and she continued to be a joy and an inspiration to each president and the members as long as she lived.

Mrs. Peoples didn’t make it to the 50th anniversary celebration of the Mothers’ Club. She passed away one month before, on January 3, 1972, at the age of 92. Today, we feel her presence, remember her gentle strength and wisdom, and feel that this is a better world because she lived in it, and made each day of her almost 93 years count for something good. She was after all “The Mother of Them All.”